Biblical Criticism and the Qur’an: The Hour Has Drawn Nigh 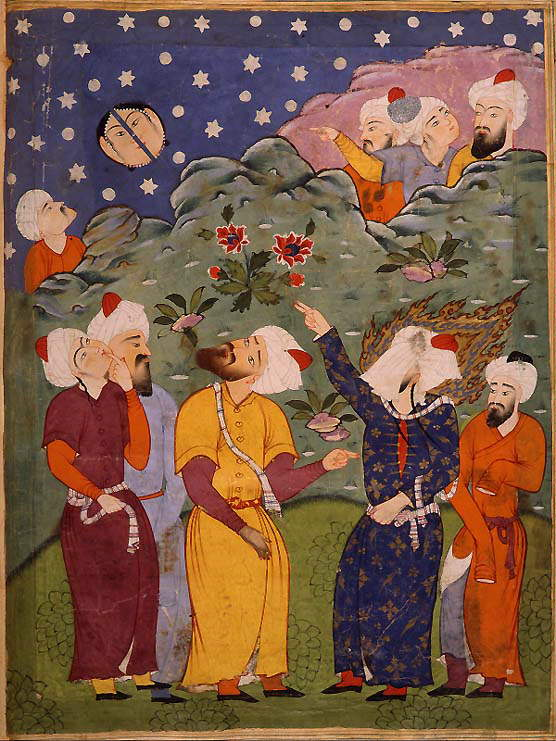 "The Hour has drawn nigh, and the moon is cleft asunder; but seeing a sign, they turn away, saying 'This is but a fleeting wonder'" (Q.54:1-2). Muslim tradition describes the occasion of revelation of these verses of the Qur'an as Muhammad's splitting of the moon in two, a miraculous rehearsal of one of the signs of the Day of Judgment. Muhammad Splitting the Moon, folio from a Fālnāma (Book of Omens), Iran or Turkey, 17th-18th c. (Dresden Eb. 445, p. 74; courtesy Sächsische Landesbibliothek – Staats- und Universitätsbibliothek).

For too long, study of the Qur’an and the rise of Islam has remained quarantined from the hermeneutics of suspicion and the critical approaches that have defined biblical and early Christian studies for well over a century. Sadly, John Wansbrough’s troubling observation that the Qur’an “[a]s a document susceptible of analysis by the instruments and techniques of Biblical criticism… is virtually unknown”1 remains no less true today than it was in 1977. Fortunately, however, it now looks as if things are beginning to change. Younger scholars of early Islam have begun to show more interest in such approaches than many of their mentors. And now there is a vibrant professional organization to support such endeavors, the recently established International Qur’anic Studies Association, as well as new academic fora such as this new digital scholarship platform, to provide a medium for the exploration of historical-critical approaches to the beginnings of Islam – or, the history of Muhammad’s Community of the Believers, as it should more properly be designated.2 Indeed, it seems that the hour has arrived for a critical turn in the study of early Islam, a turn that in some respects represents a return to the critical spirit characteristic of some of the earliest Western scholarship on Islamic origins.

The methodological toolkit developed in Biblical Studies is well suited for the investigation of early Islam, and it is to be hoped that in the near future more scholars in this area will familiarize themselves with these approaches and apply them to the Qur’an and the early Islamic tradition. There are signs of promise. For the first time now we are seeing an attempt to produce a critical edition of the Qur’an, in the Corpus Coranicum project. Nevertheless, the widespread destruction of manuscripts with variant readings in the early Islamic period should probably lower our expectations. Likewise, the project leader’s conviction that the contents of the Qur’an all date from Muhammad’s lifetime and have their origin in his preaching takes a number of important questions off of the table, it would seem.3 Indeed, it is hard to imagine a critical edition of the New Testament being produced according to a similar conviction. With this project, however, the most rudimentary method of Biblical Studies, the “lower criticism” of text criticism, has finally come to Qur’anic Studies.

Particularly enticing in regard to this project are a number of supposedly early Qur’an manuscripts that have recently made sensational headlines in the popular media. The discovery of ancient manuscripts could certainly aid in this endeavor. Nevertheless, the dating of these manuscripts has proven to be highly problematic and controversial. Suffice to say that the process of radiocarbon dating does not seem to be working accurately on these materials. For instance, one such manuscript, now in Birmingham, England, has been given a date range that places it before Muhammad began his religious movement.4 While the possibility that the Qur’an actually predated Muhammad is not entirely out of the question, the dating of this manuscript is most likely inaccurate, as are the early datings of the manuscripts in Tübingen, Leiden, and Yemen.5

The problem, it would seem, is that radiocarbon dating in the medieval period is only accurate when it can be calibrated by tree ring data, particularly from oak trees. Such data is wanting for the medieval Mediterranean or Near East, and the data from the northern hemisphere that has been used to calibrate these tests was taken from Ireland and North America. If one were to instead use the data from the southern hemisphere (and we are talking about Arabia here), I am told by those more expert in this procedure than me that very different datings would result. For the time being, then, we must remain skeptical of these sensationalist findings and their often uncritical dissemination in the popular media.

Of all the methods deployed by biblical criticism for the analysis of Jewish and Christian scriptures, the method holding the most promise for the study of the Qur’an is, I think, form criticism, and particularly New Testament form criticism, as I have proposed in my book, The Death of a Prophet, as well as elsewhere.6 This method, developed for studying the individual components of the gospel narratives during the period of their oral transmission, begins by parsing the various traditions according to their literary form. Then, a variety of criteria are applied in order to identify the circumstances that most likely gave rise to a particular tradition, as well as the impact of the process of transmission on its final recorded form.

Such an approach could replace Nöldeke’s rather dubious classification of the qur’anic sūras according to the sequence of their revelation in Mecca and Medina, which he adopts from later Islamic tradition.7 Indeed, form criticism would no longer operate at the level of complete sūras, but would instead analyze their individual elements according to literary form. Moreover, this approach would sever the problematic connection between the Qur’an and Muhammad’s biography, a hermeneutic marriage that has frequently been used to construct a sense of unity and coherence out of the Qur’an’s diverse assemblage of a wide range of textual material and traditions. Indeed, the very nature of the Qur’an’s traditions and the early reports of their assemblage almost cry out for such analysis. As Andrew Rippin notes, traditional reports of their initial piecemeal collection on “stones, palm leaves, and the hearts of men virtually jumps out at the scholar familiar with form criticism when faced with such Muslim testimony.”8

Other methods from Biblical Studies will no doubt prove to have similar value for illuminating the Qur’an and its history, and redaction criticism in particular seems to hold great promise. But before we can proceed to this and other forms of “higher criticism,” the development of a Qur’anic form criticism, inspired and guided by New Testament form criticism, seems to be a necessary first step.

STEPHEN J. SHOEMAKER is a specialist on the history of Christianity and the beginnings of Islam. His primary interests lie in the ancient and early medieval Christian traditions, and more specifically in early Byzantine and Near Eastern Christianity. He is the author of The Death of a Prophet: The End of Muhammad’s Life and the Beginnings of Islam (University of Pennsylvania Press, 2011), a study of the “historical Muhammad” that focuses on traditions about the end of his life. He has also published numerous studies on early Christian traditions about Mary (especially in apocrypha), including The Ancient Traditions of the Virgin Mary’s Dormition and Assumption (Oxford University Press, 2002), a study of the earliest traditions of the end of Mary’s life that combines archaeological, liturgical, and literary evidence. Presently he is completing a monograph that interprets the beginnings of Islam within the context of late ancient apocalypticism. He recently presented on “Jewish-Christianity, Non-Trinitarianism, and the Beginnings of Islam” at the Eighth Annual ASMEA Conference in Washington, DC.

[2] On this point, see Fred M. Donner, Muhammad and the Believers: At the Origins of Islam (Harvard University Press, 2010).

[4] See the comments of Michael Pregill regarding this manuscript in the Introduction to this forum here.

[5] See also on these manuscripts, François Déroche, Qurʾans of the Umayyads: A First Overview (Brill, 2014).

[7] First presented in Theodor Nöldeke, Geschichte des Qorâns (Dieterichschen Buchhandlung, 1860), and accepted with very little question ever since. The recent publication of Nöldeke’s work in English for the first time signals the conviction of some that his ideas are still fundamental for the critical study of the Qur’an (Theodor Nöldeke, Friedrich Schwally, Gotthelf Bergsträßer and Otto Pretzl, The History of the Qurʾān, ed. and trans. by Wolfgang H. Behn, Brill, 2013).