Collaboration is the Key: The Case of Islamic Gnosticism 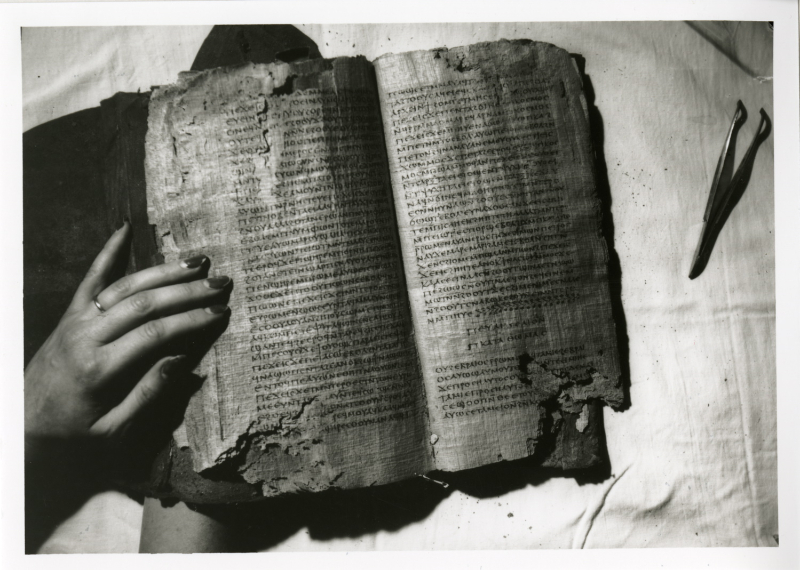 Codex II of the Nag Hammadi library, opened to the last page of the Gospel of Thomas, one of the most significant Gnostic texts recovered at Nag Hammadi. The hand is that of Marianne Doresse, wife of Jean Doresse, the French Coptologist who played an instrumental role in the discovery and publication of the corpus. Photo credit: Jean Doresse.

The last several decades have seen an increased interest among historians of early Islam and Late Antiquity in viewing the former as an integral part of the latter. Early Islam is now treated not as an entirely new civilization that had broken with the past, but as an organic part of the late antique world that retained many of the earlier traditions of cultural expression, intellectual inquiry, authority, and religiosity.1

One intriguing aspect of the continuity between early Islam and the cultural and religious milieu of the late antique Near East is the phenomenon of “Islamic Gnosticism.” For a variety of reasons, this category presents particular difficulties for students of both Islam and of Gnosticism. Classic studies in the field stress what all of us would expect – that ancient Gnostic and Manichaean sources likely played a key role in the formation of various Islamic movements that scholarship has at times, for one reason or another, dubbed “Gnostic.” Yet actually investigating how these sources fit together is easier said than done.

An obvious but enormous obstacle is the compartmentalization of our modern disciplines of research. Few trained in the study of Arabic, Persian, and Islamic history are prepared to move centuries back to a difficult, variegated corpus of Greek, Latin, Syriac, and Coptic evidence pertaining to the study of ancient Gnosticism. Conversely, experts on the ancient materials are usually bereft of familiarity and experience with even the most basic tools for the study of Islam, much less in the Arabic and Persian sources themselves. Meanwhile, Manichaean and Mandaean traditions – presenting their own philological and historical challenges – must be reckoned with as well.

Less obvious, but equally important, is a theoretical obstacle: is Gnosticism the right word for the sources in question?2 Skepticism about the usefulness of the term Gnosticism for the study of ancient and Islamic sources alike serves us well, in forcing us to clarify our language and scope of investigation. If one chooses to talk about “Gnosticism and Islam,” one must be clear about what one means by these terms. And even if one prefers to eschew the term Gnosticism entirely, the sources that the term “Gnostic” has been used to describe should not fall by the wayside. They still demand investigation.

Still, these difficulties present us with opportunities: much of the best research on Islamic Gnosticism was published in the 1970s and ’80s, which means the topic cries out for an investigation that incorporates new research, new sources, and novel approaches in studying religious texts.3 Even casual observers of the various relevant corpora – not just Islamic or Christian Gnostic, but Manichaean, Mandaean, and Jewish – know that the study of each of these fields has grown far more sophisticated in the last forty years, whether we speak of availability and quality of sources, depth of scholarly analysis, or eagerness for interdisciplinary collaboration.

The latter development is key to progress in the study of Islamic Gnosticism – and Islam and the Qur’an in general. By pooling the expertise and resources of two scholars – trained in the study of early Islam and ancient Christianity, respectively – the present authors have been able to turn with new insight to a particularly thorny body of evidence: the problem of the “Ghulāt,” the so-called “extremists” of early Shīʿī Islam, and their relationship to “Gnosticism” and Manichaeism.

The opening folio of an eighteenth-century witness to the tenth-century Kitāb al-Ṣirāṭ attributed to al-Mufaḍḍal b. ʿUmar b. al-Juʿfī, an important exposition of the doctrines of the Ghulāt (Arabe 1449, f. 86a; courtesy Bibliothèque nationale de France).

Along with new questions, the last few decades have opened new avenues for scholars to study “Islamic Gnosticism.” On the one hand, the publication of a large corpus of hitherto unknown original Ghulāt texts provides firsthand evidence about the Ghulāt’s cosmology. As opposed to earlier scholars, who largely relied on heresiographies and other indirect sources about the Ghulāt, we now have numerous texts and fragments written by the Ghulāt themselves.4 On the other hand, new research emphasizes the proximity of the largest and most well-known ancient Gnostic literary tradition – Sethian Gnosticism, principally attested at Nag Hammadi – to the late ancient Syro-Mesopotamian milieu principally known from the Pseudepigrapha and evidence regarding Jewish Christianity and early Manichaeism.5 This is precisely the late ancient milieu most relevant to the emergence of Islamic thought.6 Once regarded as marginal, we have been able to diagnose the relationship of Ghulāt thought to earlier Gnostic and Manichaean sources with considerably more specificity than have previous studies.7

Even given the advent of First Millennium Studies and increased interest in research universities in training scholars fluent in Greek and Arabic alike,8 collaborative research will remain indispensable for scholars interested in more specific, technical subjects like “Islamic Gnosticism.” “Interdisciplinary” is a word we use in our departments a lot today, but it takes investment to put it into practice. The best place to start is simply to spend time together. For the present authors, it was a department-mandated bowling night for graduate students that started a conversation that has lasted years and borne the fruit of publications. The future of the study of the emergence of Islam and the transformation of Late Antiquity lies not only in online forums like this, but in the offices of your fellow colleagues down the hall, and, perhaps, the local bowling alley. 9

MUSHEGH ASATRYAN is Assistant Professor of Muslim Cultures at the University of Calgary. He specializes in the religious, cultural, and social history of the medieval Islamic Middle East. He has published several articles on early Islam, Shiʿism, and the Iranian elements in Classical Arabic. In his forthcoming book, entitled Cosmology and Community in Early Shiʿi Islam: The Ghulat and their Literature, he studies the emergence of one of the earliest sectarian groups in Islamic history — the so-called ‘extremist-Shīʿīs.’

DYLAN M. BURNS is a research associate at the Egyptological Seminar at the Freie Universität Berlin. Co-Chair of the Society of Biblical Literature Nag Hammadi and Gnosticism Program Unit, he is the author of Apocalypse of the Alien God: Platonism and the Exile of Sethian Gnosticism (University of Pennsylvania Press, 2014); collaborative editor of Gnosticism, Platonism, and the Late Ancient World: Essays in Honour of John D. Turner (Brill, 2013); and guest editor of Aries: Journal for the Study of Western Esotericism 15.1: Esotericism and Antiquity.

Asatryan and Burns will co-present on the topic “Is Ghulat Religion Islamic Gnosticism?” at the 2015 IQSA Annual Meeting in Atlanta, speaking on “The Shiʿite ‘Extremists’ of Early Islamic Iraq” and “Syro-Mesopotamian Gnostic Traditions” respectively.

[5] Dylan M. Burns, Apocalypse of the Alien God: Platonism and the Exile of Sethian Gnosticism (University of Philadelphia Press, 2014), esp. 141–147.

[9] The authors thank the Gerber Fund and the Yale Department of Religion for taking them bowling.