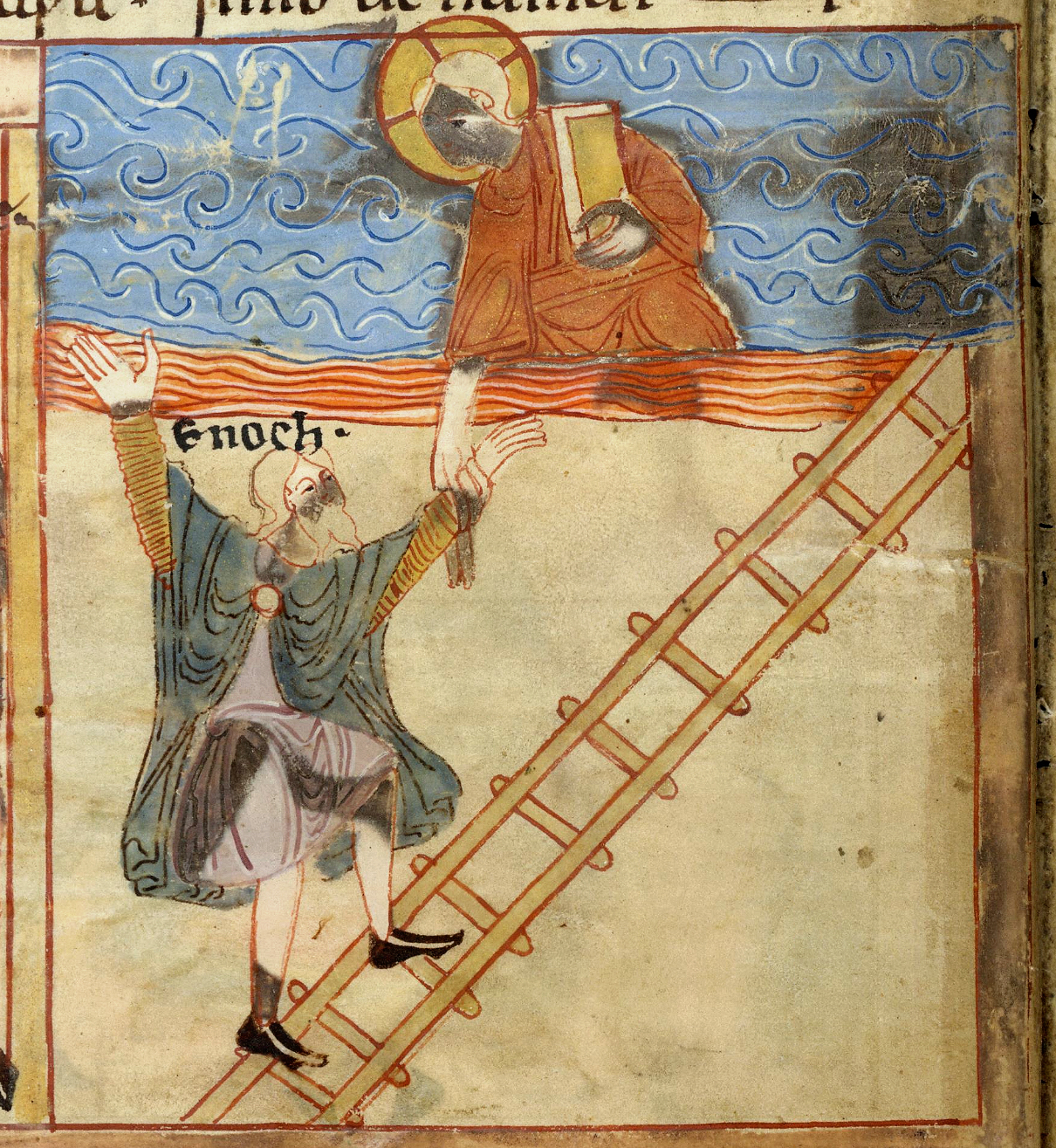 According to the account in Genesis, the patriarch Enoch “walked with God, then was no more, for God took him” (5:24). Traditions about the ascent of Enoch to heaven flourished in Jewish and Christian communities during the Second Temple period and Late Antiquity, as did a large corpus of writings ascribed to him, revealed through him, or describing his prophetic and heavenly experiences. These works were and are authoritative for numerous religious communities despite not being represented in the standard Bibles of Jews and most Christians. They therefore challenge our assumptions about the boundary between canonical and paracanonical scriptural materials. The Ascension of Enoch, manuscript illumination from the Hexateuch of Ælfric, 10th c., Canterbury, England (ms. Cotton Claudius B, f. 11v; courtesy British Library).

Scholars have often used the appearance of Islam in the Mediterranean world of the seventh century CE as a marker of rupture signaling the violent demise of the classical societies of antiquity and the onset of what the West terms the ‘Dark Ages,’ an era when learning and ‘civilized’ life were supposedly supplanted by barbarism and fanaticism. In contrast to this approach, and in line with the remarks introducing this special Mizan forum, I encourage my students to study the emergence of Islam in the Near East in terms of its manifold ideological continuities with the monotheistic currents flowing through Roman, Iranian, Axumite, and South Arabian religious communities in the sixth and seventh centuries of the Common Era.

Early Islamic discourse and practice exemplify the cross-cultural hegemony of a distinctive scriptural koine, or what might be termed an ‘Abrahamic idiom,’ of cultural expression – an articulation of one’s cultural identity in terms of an ethnic or religious association with the characters, locales, practices, and ideas found in and promoted by the various forms of Bible1 circulating within and beyond the Roman Empire during roughly the first half of the first millennium CE. Few scholars deny the relevance of Bible for unpacking the emergence of Islam and the formulation of its scriptural heritage. However, there are some things about this posited textual relationship that are commonly misunderstood and in need of further amplification.

First, there exists considerable critical naiveté about the historical and cultural processes surrounding the formation of the Near Eastern scriptural texts and canons. Many scholars operate with the assumption that ‘the Bible’ was a fixed and closed collection of canonical texts within Judaism and Christianity well before the seventh century CE, a set of writings which was universally recognized and virtually identical with those found in ‘the Bible’ of today. There is, however, no such thing as ‘the Bible’; instead, we have a variety of ‘Bibles’ which vary enormously in terms of their contents, editorial structures, and regional distributions up to and well beyond the seventh century.2 The so-called ‘Masoretic Text,’ for example, the basis for modern Western translations of the Hebrew Bible, did not exist as such in Muhammad’s day. Therefore, to affirm (as many do) that Qur’an presupposes ‘the Bible’ begs the question ‘which (or whose) Bible’?

For example, Ethiopian Christians, one of the religious communities closest in time and space to the early Muslim umma, use a biblical canon which looks very different from those constructed by Christian (and Jewish) communities in Egypt, Asia Minor, Syria, Mesopotamia, or Central Asia. One must also bear in mind that biblically affiliated groups like the Elchaisaites, Marcionites, and Manichaeans aligned themselves as ‘Christian,’ and so their textual proclivities should be taken into account in such reconstructions as well, especially since some historical notices place such groups in the Transjordan and Arabia. What kind(s) of Bible was/were used by Yemenite Jewry? Or by the Christian communities in South Arabia? Or by the zindīq members of the tribe of Quraysh who dwelt in Mecca?3 Should the boundaries of what the label ‘Bible’ embraces be expanded to include something like the Cave of Treasures, a pre-Islamic Christian work which effectively replaces Bible in much of the eastern universal chronicle tradition of historiography? Most studies of the Qur’an or early Islam do not address these kinds of fundamental issues at all. Yet recognizing them is absolutely crucial for achieving a deeper insight into the kind of contextualized discourse the Qur’an allegedly presupposes.

Certain fundamental conceptual and methodological problems must also be addressed and resolved. For example, the facile wielding of reified generic categories like ‘Jews,’ ‘Christians,’ ‘the Syriac Church,’ etc., does not adequately address the complexity of religious identity in the eastern Roman and Sasanian worlds of Late Antiquity: none of these labels displays a critical understanding of the varying regional and cultural differences differentiating these (and other) biblically-allied groupings. There was, for example, no such thing as ‘the Syriac Church’ to which one can attribute a governing structure, fixed canon, or doctrinal uniformity; similarly, we witness a variety of ‘Jewish’ behaviors and institutional hierarchies across the eastern world of Late Antiquity. Pronouncements and conclusions about the backgrounding of qur’anic language and characters in the literatures of ‘Jews’ and/or ‘Christians’ require considerably more cultural nuancing than has typically been the case to date.

Traditions about Enoch were so widespread in the late antique milieu that the Qur’an represents him as one of the patriarchs and prophets of Israel alongside more ‘canonical’ figures such as Noah, Abraham, and Moses. However, the Qur’an (and subsequently Islamic tradition) calls him not Enoch but Idrīs, a name that suggests his role as heavenly teacher and revealer of divine secrets. Idrīs is among the Israelite prophets Muhammad encounters in the classic narratives of his miraculous Night Journey from Mecca to Jerusalem and subsequent ascent to Heaven. Detail, Muhammad Encounters Noah and Idrīs in the Sixth Heaven, folio from an Eastern Turkish Miʿrāj Nāma, Herat, 15th c. (Supplément turc 190, f. 26v; courtesy Bibliothèque nationale de France).

Finally, we must avoid working with the indefensible proposition that any Jewish (or Christian) exegetical tradition or testimony must necessarily be older than any similarly couched Muslim one, and thus may be presupposed as the intertextual background for traditions in Qur’an or its interpretative literature. This is an uncritical, even pre-modern, approach to the study of Jewish (and Christian) literary traditions that is driven largely by apologetic and theological concerns. It must be remembered that these distinct religious communities of Jews, Christians, and Muslims were not hermetically sealed packages; they read, discussed, disputed, adapted, rejected, and parodied each other’s literary materials, as is abundantly illustrated in the historical and polemical literatures they respectively generated. Care must be exercised by comparative philologists when using Jewish exegetical collections and anthologies which stem from an Islamicate cultural sphere, such as Pirqe de-Rabbi Eliezer or Midrash ha-Gadol. If a particular shared motif or theme is not present in indubitably pre-Islamic Jewish sources, our first instinct is to identify it as having been borrowed or adapted from Islam. There are indeed a number of instances where this seems to be the case.4 Yet at the same time, we must also bear in mind that these same post-Islamic works may have been privy to genuinely older Jewish textual constellations extant within their communities emanating from as far back as the Second Temple period of Jewish history. Similarly, those circles who generated Qur’an and its associated literatures may have very well had knowledge of or access to early forms of ‘Bible’ which were, literarily speaking, more ‘primitive’ in form and content than what surfaces as a ‘canonical text’ in a later era.5 Adjudicating the tension between these two hermeneutic positions is a complex process which admits no easy resolution.

JOHN C. REEVES is Blumenthal Professor of Judaic Studies at the University of North Carolina at Charlotte. He is the author of Jewish Lore in Manichaean Cosmogony: Studies in the Book of Giants Traditions (Hebrew Union College Press,1992); Heralds of That Good Realm: Syro-Mesopotamian Gnosis and Jewish Traditions (E. J. Brill, 1996); Trajectories in Near Eastern Apocalyptic: A Postrabbinic Jewish Apocalypse Reader (Society of Biblical Literature, 2005); and Prolegomena to a History of Islamicate Manichaeism (Equinox, 2011). He is editor of Tracing the Threads: Studies in the Vitality of Jewish Pseudepigrapha (Society of Biblical Literature, 1994) and Bible and Qur’an: Studies in Scriptural Intertextuality (Society of Biblical Literature, 2003). He has also published a number of articles exploring aspects of the literary and historical relationships among the varieties of indigenous, Jewish, Christian, Zoroastrian, gnostic, and Muslim communities during Late Antiquity and the Middle Ages. His most recent project, Illuminating the Afterlife of Ancient Apocryphal Jewish Literature, was awarded an American Council of Learned Societies Fellowship for 2015-2016. In November, he spoke on “Near Eastern Afterlives of Ancient Jewish Materials” as part of the 2015-2016 Philadelphia Seminar on Christian Origins at the University of Pennsylvania.

[1] I deliberately eschew the use of the definite article with this particular proper noun. See the sources cited in the next note for a justification.

[4] One thinks, e.g., of Pirqe de-Rabbi Eliezer §§13-14 (the temptation and ‘fall’ of Adam and Eve) where the narrative sequence reflects that of Q.2:30ff. rather than that of any comparable ‘biblical’ (i.e., Jewish or Christian) tale.