Food, Identity, and ‘Third-Way’ Groups in Late Antiquity and at the Origins of the Qur’an 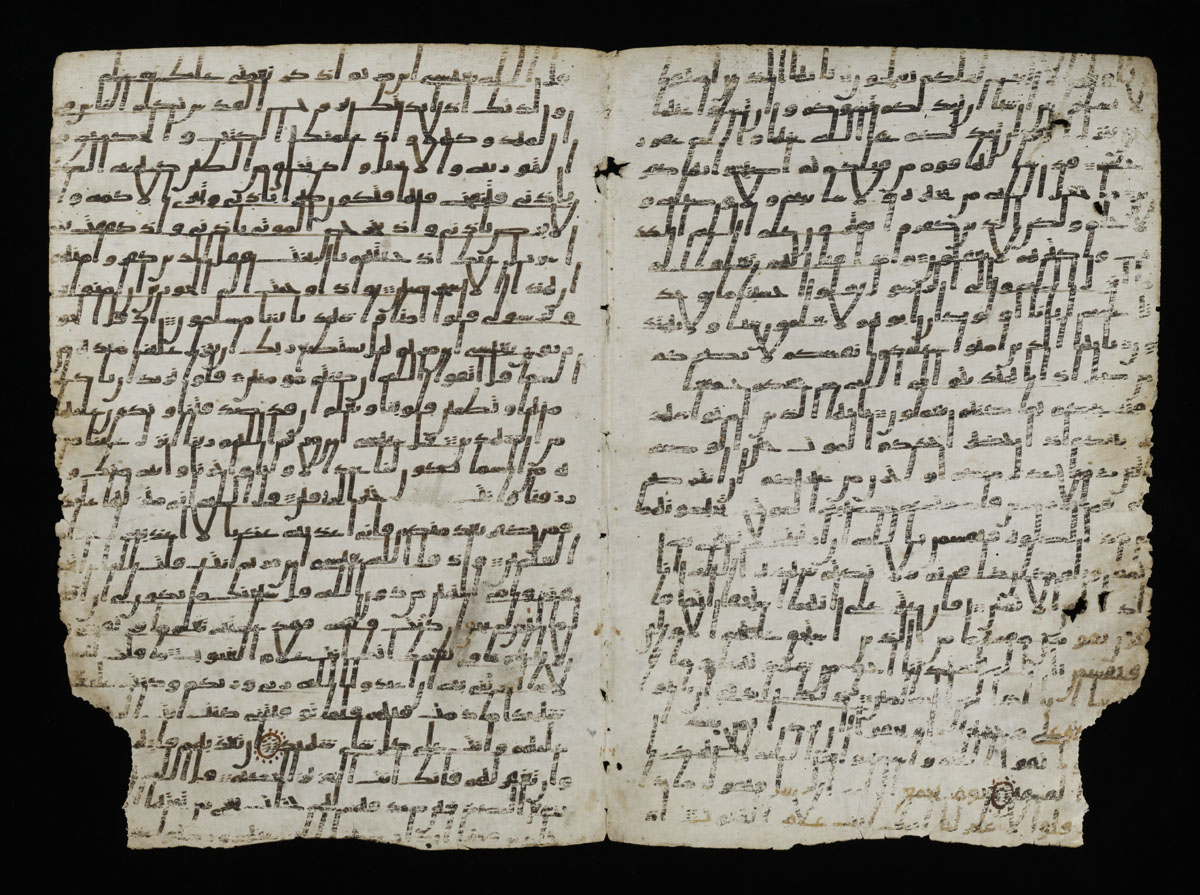 A leaf from an early Qur'an from the Ḥijāz, in the māʾil or 'slanting' script that is characteristic of Qur'ans produced during the first century of Islamic history. This leaf contains the last part of Sūrat al-Māʾida and the beginning of Sūrat al-Anʿām (Q.5:89-6:12) (LNS 19 CA a-b; courtesy Dar al-Athar al-Islamiyyah, The al-Sabah Collection, Kuwait).

“The food on one’s plate,” declares one modern scholar of Judaism, “serves as a social symbol or sign that communicates group association and disassociation.”1 This is no less true of late ancient congregations than it is of contemporary religious traditions. The Jews, for instance, are known to have distanced themselves from some foodstuffs since ancient times, and later the Christians, too, tried to mark themselves out by differentiating themselves from both Jews and pagans in matters culinary.2

Being thoroughly conversant with the late ancient milieu in which it emerged, the sacred book of Islam is, as we would expect, invitingly rich in food-related regulations. This is particularly the case with those sūras that have traditionally been assigned to the late Meccan and Medinan phases of Muhammad’s prophetic career and are generally understood to reflect the increasing need for legislation on various issues in an emerging community.

However, up until fairly recently, modern scholarship on the Qur’an has paid scant attention to these passages; and when it has, this has occurred as part of an effort to understand the scripture’s legal mindset rather than the content and function of its dietary regulations per se.3 As noted above, dietary practices were, and still are, commonly used as markers of ethno-religious identity, and, accordingly, qur’anic commandments concerning food could also be of importance because of the light they shed on the many ethico-religious trends current in the qur’anic milieu and the boundaries separating them from each other. The Qur’an engages the three major (overlapping) religious groups that inhabited its Umwelt in disputation over their dietary practices: the Jews, the Christians, and the mushrikūn.

A statuary group dating to the first or second century from Hatra, a Hellenized Arab city-state in the Jazīra (in the north part of modern Iraq). During the late centuries BCE and early centuries CE the city flourished on the trade routes between the Roman and Parthian empires. This group has been subject to varying interpretations, but some see the central figure as Allat, a pagan Arab goddess assimilated to Athena. If her attendants are identified as the associated deities Manat/Manawat and al-ʿUzza, this group may depict the ‘Daughters of Allah’ mentioned in the Qur’an as being worshipped by the mushrikūn. Others, however, see these ‘associators’ as essentially monotheistic, and the Daughters as angelic intercessors.

The qur’anic term mushrik is usually conveniently translated as ‘pagan’ or ‘idolater,’ but the mushrikūn, to judge by the qur’anic data, were almost certainly monotheist people whose monotheism was deemed less than perfect, and consequently harshly frowned upon, by the Qur’an. It is perhaps not insignificant that the text’s food-related polemics are, in the main, directed against the mushrikūn.

The longest such pericope is Q Anʿām 6:136-47, wherein the Qur’an first rejects the existence of any restrictions on the consumption of food (vs. 145) – bar a few items like carrion and pork – and then limits the application of Jewish food laws to Israelites (vs. 146), thereby suggesting that its mushrikūn observed Jewish dietary restrictions. The verse then goes on to state that these restrictive laws were promulgated as a punishment for the Israelites’ transgressions (baghy). In the next verse (147), the text invokes God’s mercifulness, thus hinting that He would not wantonly restrict his servants, but assures its audience that “His chastisement would not be averted from the wrongdoer party,” thus indicating that the Jews will have to continue to observe these regulations.

Slightly later, the Qur’an leaves no doubt as to the identity of its disputants by stating that “this is a book (kitāb) We have sent down,” so as to pre-empt flimsy excuses (presumably in the hereafter) like, “the book had only been sent down to two groups (ṭāʾifatayn) before us and we were ignorant of their teachings” (vs. 155-6). The ‘two groups,’ no doubt, refers to the two older monotheistic communities, to wit, Judaism and Christianity. Therefore, the qur’anic text implies that its addressees, who adhere to Jewish food laws, are themselves actually neither Jews nor Christians.4

It is something of a truism to say that scholarship is a collective venture. In that respect, all scholars are indebted to innumerable generations of pioneers who first explored the once-murky waters that we now so dexterously navigate. As a student of the Qur’an, I am no exception to this rule; however, I should like to single out three erudite scholars whose work has helped direct me to this line of enquiry. My research builds upon, and blends together, the commendable achievements of Gerald Hawting, Holger Zellentin, and the late Patricia Crone to arrive at a hopefully more nuanced understanding of the emergence of the Qur’an and Islam.5 Gerald Hawting was the first to show that the traditional image of pre-Islamic Arabia as a pagan reserve, with its primitive idolatry, is in stark contrast to the qur’anic image of a biblically-savvy audience who appear to have more in common with the qur’anic messenger than the Islamic tradition is ready to grant.6 He was followed in this by Patricia Crone.7 Holger Zellentin’s monograph is a timely reminder that scholars of the Qur’an should, like their colleagues in the neighboring fields of early Christian and Judaic studies, take note of the importance of the dietary concerns of the subject of their study – with its most salient point being its successful situation of the Qur’an within the framework of a late ancient ‘legal culture’ shared with ‘Jewish-Christian’ texts like the Pseudo-Clementine Homilies and the Didascalia Apostolorum. I hope that the foregoing précis has succeeded in convincing my readers that a combination of these two approaches is capable of offering new insights into the religious world of Near Eastern Late Antiquity.

MEHDY SHADDEL is an independent scholar whose interests lie primarily in Late Antiquity, with special reference to the emergence of the Qur’an, the rise and early history of Islam, and apocalypticism and eschatology. His current projects include a monograph on the Qur’an’s food laws and the dietary (mal)practices of its opponents.

[4] For further discussion of qur’anic polemics over food, see my “Qurʾānic ummī: Genealogy, Ethnicity, and the Foundation of a New Community,” forthcoming in Jerusalem Studies in Arabic and Islam 43 (2016).

[5] See, in particular, G. R. Hawting, The Idea of Idolatry and the Emergence of Islam: From Polemic to History (Cambridge University Press, 1999); Patricia Crone, “The Religion of the Qurʾānic Pagans: God and the Lesser Deities,” Arabica 57 (2010): 151-200; and Holger Michael Zellentin, The Qurʾān’s Legal Culture: The Didascalia Apostolorum as a Point of Departure (Mohr Siebeck, 2013).

[6] There has likewise been an increasing awareness on the part of scholars of late ancient Christianity that such terms as ‘pagan’ and ‘heathen’ in reality hardly signified the kind of savage polytheism that the Christian authors of this period would have liked their readers to believe; see, e.g., Christopher P. Jones, Between Pagan and Christian (Harvard University Press, 2014).

[7] I must nevertheless emphasize that the ‘skeptical’ approach to the Muslim tradition has a longer history which owes much to the work of John Wansbrough. Patricia Crone must also receive part of the credit as the co-author (along with Michael Cook) of Hagarism: The Making of the Islamic World (Cambridge University Press, 1977), a work which has had a lasting impact on the field. For a survey of the epistemological turns in the history of modern scholarship on the Qur’an, see Fred. M. Donner, “The Qurʾān in Recent Scholarship: Challenges and Desiderata,” in Gabriel Said Reynolds (ed.), The Qurʾān in Its Historical Context (Routledge, 2008), 29-50.