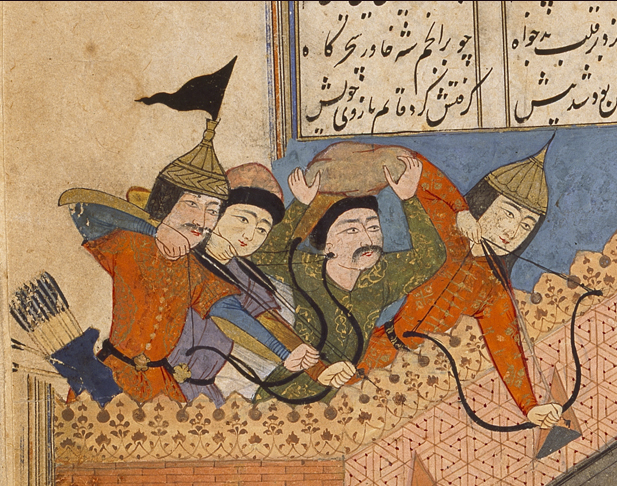 The Jews of Khaybar (here depicted in the prevailing Perso-Mongol visual style common in the eastern Islamic world in this period) defend the fortress of Qamūṣ against Muhammad and ʿAlī. Detail, manuscript illumination, ʿAli Fighting to Take the Fortress of Qamūṣ, from Athār al-Muẓaffar (The Exploits of the Victorious), Iran, 16th c. (Chester Beatty Library Per 235, f. 132a; courtesy Chester Beatty Library).

It is something of an understatement to say that the study of the Qur’an and Islamic origins is currently in a state of extreme ferment. The emergence of revisionist approaches to research into Islamic origins in the late 1970s led to the questioning of fundamental assumptions about the authorship, dating, and canonization of the Qur’an, and the reliability of the traditional sources on the emergence of Islam was called into doubt. Decades of relative silence on these subjects followed, as the impasse between revisionists and more traditionally-minded scholars seemed insurmountable.

However, over the last decade, we have seen a significant resurgence of interest in exploring Islamic origins and the background to the Qur’an by examining the history, politics, culture, and religion of the wider world of Late Antiquity in which the Qur’an was revealed and the Muslim umma emerged. The accuracy of traditional accounts about the life of Muhammad and the rise of Islam; the context of the Arab conquests and the foundation of the first Islamic state; and the Qur’an’s links to the sacred texts and traditions of the monotheistic communities that preceded it are all subjects currently being explored by scholars affiliated with a number of different disciplines, institutions, and organizations.1

The recent media coverage of the news that carbon dating indicates that a partial Qur’an manuscript held in the Cadbury Research Library of the University of Birmingham may be the oldest extant witness to the qur’anic text reflects the wide interest, if not fascination, with questions pertaining to Islam’s origins. The carbon dating of the leaves of this manuscript, designated Mingana 1572a, has produced a range of possible dates of origin from 568 to 645 CE; notably, this range almost entirely precedes the caliphate of ʿUthman b. ʿAffān (r. 644-656), during which the canonical text was supposedly produced. Moreover, it is a curious fact that the upper reaches of the date range actually precede the prophetic career of Muhammad, at least according to the dates conventionally assigned to it (610-632).

The Birmingham Qur’an, folios 1 and 2 of Mingana 1572a held in the Cadbury Research Library of the University of Birmingham. Carbon dating results point to a date of production for these leaves of the Qur’an, written in the Ḥijāzī or māʾil (sloping) script that was likely the earliest form of writing utilized by the early Muslim community. (Image courtesy Wikimedia Commons.)

In commenting on the news about the Birmingham Qur’an, one scholar, Joseph Lumbard, asserted that the carbon dating confirms the traditional account of the origins of Islam, and called for scholars and students of the Qur’an in western institutions to apply themselves with renewed vigor to adopting and adapting approaches to the scripture grounded in the methods and perspectives associated with traditional Islamic scholarship.2 Yet another scholar, Gabriel Said Reynolds, observed that carbon dating of several other ancient Qur’an manuscripts has yielded date ranges that are likewise surprisingly early, and noted that rather than confirming traditional accounts, this data should inspire renewed efforts at interrogating them.3 Both perspectives are surely valid, especially given the ambiguity of the data; and given that research is not a zero-sum game, there is no reason why scholars cannot pay serious attention to traditional Muslim approaches to the Qur’an while also being open to critical reflection on the historiography of Islamic origins. Ultimately, the fact that the same body of data can inspire such radically different conclusions about the Birmingham manuscript’s significance for scholarship indicates the vitality of the contemporary field of Qur’anic Studies and the rich possibilities for future research.

In many ways, the relationship of the Qur’an and the early Islamic community to late antique Judaism and Christianity is absolutely central to the problems that lie at the heart of research in Qur’anic Studies and Islamic origins. Since the early nineteenth century, the thesis of a thoroughgoing influence of contemporary Judaism on Muhammad advanced by Abraham Geiger (1810-1874) has had an enormous impact on modern approaches to the Qur’an. However, the countervailing argument that it was some variety of late antique Christianity that had percolated into Arabia that exerted the necessary stimulus for the emergence of Islam out of a thoroughly pagan Arab environment has also had some purchase in the field for some time, ever since the pioneering work on the subject by Tor Andrae (1885-1947) in the early twentieth century. Today, scholars generally reject the reductionist and narrowly mechanistic conception of influence that pervades older scholarship such as that of Geiger and Andrae.4 Moreover, it is clear that the relationships between the Qur’an and formative Islam on the one hand and other traditions of the pre-Islamic and early Islamic era on the other must be framed as a tripartite conversation between Jews, Christians, and the community of believers (muʾminūn) who eventually came to call themselves Muslims.

Coin of the negus (king of the Ethiopian kingdom of Axum) Ella Aṣbeḥa, known as Kālēb. In the 520s Kālēb asserted a claim to territory in Yemen on the basis of his dynasty’s Solomonic pedigree; his campaigns in South Arabia, one of which sought to unseat a Jewish ruler in the Yemenite kingdom of Ḥimyar, left traces in numerous sources of the period, including the Qur’an, if Sūra 105, Al-Fīl (The Elephant) is correctly interpreted as alluding to an Axumite assault on Mecca in the time of the Prophet Muhammad’s grandfather. (Image courtesy Wikimedia Commons.)

Scholars now widely recognize the numerous continuities between the religion, culture, politics, and society of Late Antiquity and that of early Islam. The transition from a Mediterranean and Near East dominated by Rome and Persia to one united under the caliphal empire that presided over the emergence and consolidation of Islamic society occurred gradually, marked by complex processes of adaptation and appropriation, rather than radical disruption or dislocation.5 At the same time, Islam’s emergence in Late Antiquity was a distinct result of both imperial conflict and intercommunal rivalry; thus, in this arena of conflict and convergence, early Muslims were often quite close to, and implicated in, the debates, disputes, and struggles of their age.6 Their ideas, idioms, ideals, and aspirations were similar to those of their Jewish and Christian neighbors, although ironically, each religious community used similar language, concepts, and symbols to assert its uniqueness and difference as sole claimant to the status of God’s chosen people.

The short essays in this forum are dedicated to reflection upon the contemporary challenges and prospects for discovery and innovation in the study of the Qur’an and early Islam, particularly as they stand at a nexus of convergence with Judaism, Christianity, and other traditions. The twelve scholars who have contributed essays to the forum will examine what they see to be the most significant aspects of current research into the continuities between Late Antiquity and formative Islam from a variety of perspectives and locate their own work in the context of the larger scholarly landscape. Some of our contributors speak in broad terms about the nature of interdisciplinary inquiry and the necessity of collaboration between scholars in different fields. Others focus in very concrete ways on the particular results of comparative investigation, methodological innovation, and openness to diverse perspectives.

The first six posts have been published along with this Introduction to the project; the second set of posts will appear here in a few weeks.

MICHAEL PREGILL is Interlocutor in the Institute for the Study of Muslim Societies and Civilizations. He is Chair of Publications and Research of the International Qur’anic Studies Association and Head Editor of the Journal of the International Qur’anic Studies Association. Additionally, he is Co-Chair of the IQSA Qur’an and Late Antiquity Program Unit. He will present his paper “Scriptural Virtuosity and the Qur’an’s Imperial Context” at the 2015 IQSA Annual Meeting in Atlanta.

[1] On the contemporary revival of critical inquiry into the origins of the Qur’an after a number of decades of relative stagnation in the field, see Gabriel Said Reynolds, “The Golden Age of Qurʾānic Studies,” in Gabriel Said Reynolds (ed.), New Perspectives on the Qurʾān: The Qurʾān in its Historical Context 2 (Routledge, 2012), 1-21.

[4] Despite their differences, both Geiger and Andrae credit the rise of Islam to the direct influence of religious personnel in the pre-Islamic Arabian environment on Muhammad: Geiger emphasizes Muhammad’s extensive borrowing of traditions from learned Jews, which he copied more or less exactly in composing the Qur’an, while Andrae imagines the Prophet observing and directly imitating the religious behavior of Christian monks whom he encountered. On the problematics of the influence paradigm as it is traditionally applied to the Qur’an, see Michael E. Pregill, “The Hebrew Bible and the Quran: The Problem of the Jewish ‘Influence’ on Islam,” Religion Compass 1 (2007): 643-659 (http://onlinelibrary.wiley.com/doi/10.1111/j.1749-8171.2007.00044.x/abstract).

[5] Older Eurocentric historical models such as those of Gibbon and Pirenne emphasized the disruptions and discontinuities caused by the collapse of the Roman Empire in the west and the emergence of Islam in the east in order to highlight the contrast between the Dark Ages and the European Renaissance; in the 1970s and 1980s scholars such as Peter Brown rejected this model in favor of an approach that integrated Islam into larger historical trends and cultural patterns. See the recent theoretical reflection of Robert Hoyland, “Islam as a Late Antique Religion,” in Scott Fitzgerald Johnson (ed.), The Oxford Handbook of Late Antiquity (Oxford University Press, 2012), 1053-1077. The implications of the contemporary expansion of the category of Late Antiquity to incorporate Islam and other traditional outliers is explored in Philip Rousseau’s trenchant essay, “Can ‘Late Antiquity’ Be Saved?,” Marginalia, September 19, 2015 (http://marginalia.lareviewofbooks.org/can-late-antiquity-be-saved-by-philip-rousseau/).

[6] For concise, vivid explorations of the context of imperial conflict that prevailed at the time of Islam’s emergence and arguably precipitated the rise and political involvements of Muhammad’s community, see the recent complementary studies of G.W. Bowersock, Empires in Collision in Late Antiquity (Brandeis University Press, 2012) and The Throne of Adulis: Red Sea Wars on the Eve of Islam (Oxford University Press, 2013). Bowersock’s concise overview of his research in this area, “The Rise and Fall of a Jewish Kingdom in Arabia” (IAS Bulletin, Fall 2011) may be accessed at https://www.ias.edu/about/publications/ias-letter/articles/2011-fall/jewish-arabia-bowersock.