“Those Who Came Before You”: Exegetical Encounters in Late Antiquity 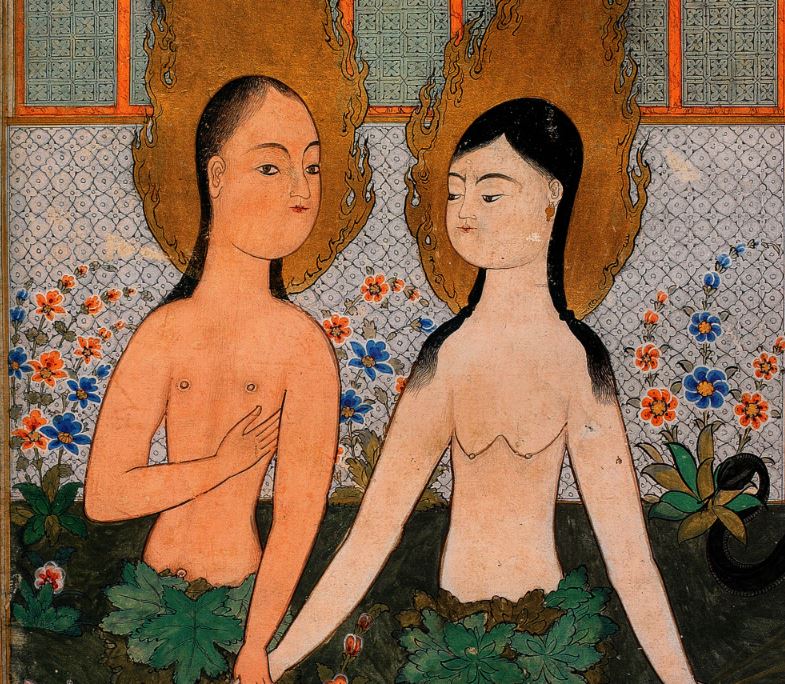 The story of Adam and Eve, their creation and transgression, constitutes an enduring presence in world history, literature, and art, especially for those who claim the legacy of Genesis as their own primordial history. While the primeval couple and the series of events that befell them figure prominently throughout the Islamic tradition, the qur’anic account differs notably from that of its sibling narrative in the Bible.

Although Adam is frequently mentioned in the Qur’an, his spouse is never identified by name; she is instead reduced to a mimetic character whose textual presence is manifested only indirectly, implicit in the usage of the grammatical dual when God consigns Adam and his “spouse” to the Garden: We said, “O Adam, dwell, you and your spouse (uskun inta wa-zawjuka), in the Garden, and eat (kulā) therefrom freely wherever you wish (ḥaythu shiʾtumā). But do not approach this tree (wa-lā taqrabā hādhihi al-shajara), lest you both be among the transgressors (fa-takūnā min al-ẓālimīn”) (Q. 2:35; 7:19); and again, when they encounter Satan: “Then Satan whispered to them to make them see their shameful parts (sawʾātihimā) which were hidden from them, and he said, ”Your Lord has only forbidden you two from this tree lest you become angels (malakayni) (Q. 7.20); and finally, when they are cast out of their heavenly abode: He said, “Be cast out (ihbiṭā/ihbiṭū) from here together” (Q. 2:36; 2:38; 7:24; 20:123).

The critical divide between the qur’anic narrative and the biblical tradition, as depicted in Genesis 1-3, is that in the former, God mentions only Adam by name. Thus, while the Qur’an tells the story of how primordial history unfolds, it never holds Adam’s wife uniquely culpable or as the first to fall sway to Satan’s gambit; instead, the pair are chastised together for eating from the forbidden tree and are banished from the Garden. It is rather curious, then, that by the eighth century, in much of the post-qur’anic exegetical tradition, Eve (Ar. Ḥawwā’) is indicted as the beguiler of Adam, and thus, ipso facto, held accountable for the fall of humankind. Her image in the post-qur’anic literature is reminiscent of that of her biblical counterpart. The origins of this Eve are not qur’anic, and thus must be located elsewhere.

In my recent research, I have undertaken an analysis of the qur’anic Eve-passages and the formative exegetical materials that bear upon them, whether culled from tafsīr or ḥadīth. While the primary focus falls upon the various mytho-poetic personas of Eve within the Islamic tradition, a project of this scope cannot proceed by cordoning off the Islamic tradition from kindred traditions; rather, any reading of the Islamic Eve must place the Islamic traditions thereon in the context of the Near Eastern literary traditions spanning the ancient Near East and Late Antiquity. Although such pre-Islamic traditions are vast in scope and expansive in their chronological development, it must be affirmed that they were nonetheless instrumental in influencing Islamic perceptions and conceptions, albeit in different ways.

The Triumphal Arch of Palmyra in Syria. The ruins of ancient civilizations scattered around the desert, rural, and urban landscapes of the Near East provide a visual complement to the Qur’an’s repeated emphasis on the theme of ubi sunt – the urgent necessity for its audience to take heed and remember the fate of previous generations and communities, both those that followed divine guidance and were saved and those that did not and suffered a harsh fate. In a bitter irony, the Arch was destroyed in October 2015 by ISIS, who interpret such sites only as reminders of polytheism (picture courtesy Wikimedia Commons).

The full meaning of the Qur’an cannot be readily discerned without an understanding of the traditions of the people to whom the Qur’an refers simply as “those who came before you” (alladhīna min qablikum). Indeed, for the historian, it remains virtually impossible – let alone desirable – to attempt to understand a large number of qur’anic verses without considering their context. The analyses of the qur’anic Eve-pericopes and their companion traditions proceeds structurally, syntactically, functionally, and semantically in an attempt to disentangle the narrative voices and illuminate respective narrative contexts, whether they be semantic, mythic, historical, etc. Accounts must be read against extra-qur’anic material to identify, isolate, and record the paradigmatic changes and innovations represented in the Qur’an. Examinations of these permutations in the light of late antique literature will determine the extent of filiation facilitated through “exegetical encounters” between the diverse panorama of religious adherents, Muslim and non-Muslim, who encountered and interpreted the Qur’an.1

Much recent scholarship has demonstrated how the Qur’an can be better understood through intertextual readings of earlier religious traditions without mitigating the agency and cogency of the text and the literature it inspired. In the last decade, one of the arguments at the forefront of Islamic Studies has been that a better understanding of the Qur’an and its attendant traditions emerges when they are viewed as products of the late antique milieu. Entire volumes have been devoted to this somewhat novel approach. In their relevant and timely work, The Qurʾān in Context, Sinai, Neuwirth, and Marx argue that the Qur’an must be viewed “as part and parcel of the wide expanse of monotheistic literature.”2 Samir Kassir’s work on the “myth of origins” is similarly representative of this trend in qur’anic scholarship. He argues against traditional depictions of pre-Islamic Arabia as an insular wasteland, void of sophisticated cultural and religious production, as lacking sound evidentiary foundation.3 Other archeologists, philologists, and paleologists have contributed to this conversation, all of them highlighting the need to view the Qur’an as a product of the late antique milieu whose frame of reference and influence extend beyond the Arabian Desert.4

Though these approaches are somewhat novel in Qur’anic Studies, the Qur’an itself emphatically affirms from the outset its relationship with a plurality of predecessors, and demands that its audience draw from the deep reaches of the Abrahamic tradition when heeding its message. As perhaps the world’s first “self-aware” scripture, it continually situates itself within the sacred trajectory of human history by inviting its audience to recall events of a shared sacred past, through the statement “wa idh,” which can be read idiomatically as “udhkur mā kāna” (remember what happened).5 Indeed, the manner in which the Muslims used the earlier Jewish and Christian texts to understand their own sacred history is reflected in the text’s historical self-image of itself as the inheritor of a long monotheistic tradition.

CATHERINE BRONSON is currently Assistant Professor of Arabic and Islam at the University of Notre Dame. She specializes in Arabic pedagogy, Islamic intellectual thought, the religious traditions of the late antique Near East, and gender constructions in Islam. Her research and publications focus on how the interpretation and formulation of the Qur’an during the formative period of Islam influenced doctrine, culture, and civilization. Her article “Eve in the Formative Period of Islamic Exegesis,” in Andreas Görke and Johanna Pink (eds.), Tafsīr and Islamic Intellectual History: Exploring the Boundaries of a Genre (Oxford, 2014), looks at the origins of the intrinsic paradoxes produced by the vying images and personas of Eve found in the early Islamic tradition. She is Co-Editor of the Review of Qur’anic Research published by the International Qur’anic Studies Association.

[1] In their recent work on Judaism and Christianity in Late Antiquity, Emmanouela Grypeou and Helen Spurling coined the phrase “exegetical encounters” to describe the movement of traditions between religious groups. They state that while it may not be possible to reconstruct the exact nature of these “encounters,” evidence can be adduced to show that this contact occurred in various ways under different circumstances, including 1) an individual exegete having familiarity with external exegetical traditions or doctrinal controversies, either through an oral or a textual medium; 2) the availability of written documents, despite possible language barriers; 3) a social context that allowed for the exchange of information through actual dialogue; and 4) the general knowledge of circulating oral traditions. See Emmanouela Grypeou and Helen Spurling (eds.), The Exegetical Encounter between Jews and Christians in Late Antiquity (Brill, 2009).

[5] John Penrice, A Dictionary and Glossary of the Kor-ân with Copious Grammatical References and Explanations of the Text (King, 1873; repr. Curzon, 1970), 4.