When Jews and Christians Believed in the Qur’an 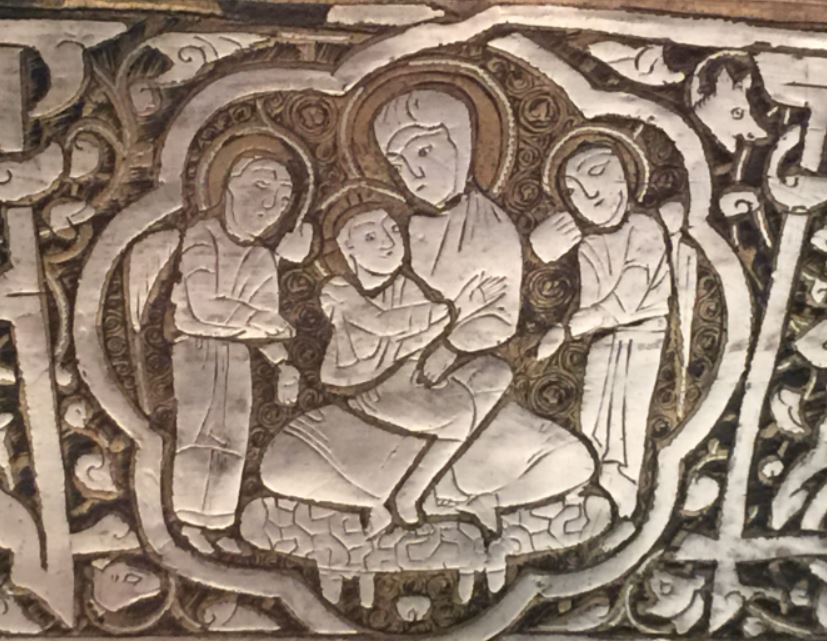 Jesus and Mary enthroned and flanked by angels, detail of a brass basin inlaid with silver from northern Iraq, Ayyubid period, early 13th c. (F1955.10, Freer and Sackler Galleries). Produced in one of many areas in the Islamic world in which Muslims and Christians coexisted for centuries, the basin features numerous scenes from the life of Jesus. Photo credit: Michael Pregill.

When did Jews and Christians ever believe in the Qur’an? The first step towards answering this question is dispelling the myth that the Qur’an’s seventh century audience were “ignorant” pagans. On the contrary, the Qur’an’s audience had the same degree of literary, intellectual, and cultural sophistication that produced the Qur’an’s “clear Arabic language” (Q.16:103; 26:195). The second step is to assert the fact that the text explicitly and repeatedly calls out to the “People of the Scripture” (Ahl al-Kitāb, meaning Jews and Christians) inviting them to believe. In doing so, the Qur’an offers strong criticism of Christological church controversies in Late Antiquity, and charts a new path which it calls Islam. In no other chapter or passage is this clearer than in Sūra 3.

The Qur’an’s address to a single audience of Jewish and Christian origin begins with the very name of Sūra 3, the “House of ʿImrān,” in which the biblical patriarchs Amram and Joachim are deliberately merged into a new patriarch by the name of ʿImrān. Scholars and critical readers of the Qur’an will recognize ʿImrān not as a single historical character, but a literary figure whose identification with the houses of Moses and Jesus presents an invitation to Jews and Christians alike (see further Q.5:17; 19:28; 66:12; 19:28). The confessional equality of both groups for the expressed purpose of proselytization is elaborated upon throughout Sūra 3.

According to Sūra 3, the community of believers is a nation founded upon ancient Abrahamic principles of non-denominational (gentile?) monotheism, but whose principles are located at the center of the ethics of both rabbinic Judaism and ecclesiastical Christianity. The Jewish-Christian nature of these communitarian principles, while controversial, is clear to an increasing number of scholars today.1 More precisely, however, the Jewish-Christian quality of this qur’anic discourse is (1) explicit in the inter-confessional and ecumenical term “People of the Scripture” (i.e. both Jews and Christians together) and (2) informed by the requirement of ”keeping the law (Syr. nāmūsā)” within the eastern churches. Within the missionary scope of Sūra 3, as well as within its rhetorical use of the imperative “Say!,” are the remnants of an interreligious gathering – possibly an historical event.

And to whomever disputes with you about him [i.e. Jesus] after a portion of knowledge has come to you, say, “Come, let us call our sons and your sons, and our wives and your wives, and ourselves and yourselves. Then let us exclaim and bring the curse of God upon the liars… Say, Oh People of the Scripture, “Come to a moderate word between us and you, that we will not serve any except God, nor associate anything with Him, nor will any of us take each other as lords besides God.” But if they turn away, then say, “Bear witness that we are submitters (muslimūn)”… Say, “We believe in God and what has been revealed to Abraham, Ishmael, Isaac, Jacob and the tribes, and in what was given to Moses, Jesus and the prophets from their Lord; we do not distinguish between anyone of them, and we submit to Him (naḥnu lahu muslimūn).”2

Further research may shed light on the historical details of this event. For our purposes, however, this passage is part of a longer address to Jews and Christians that is found between verses 61-104. The passage itself has been divided between verses 61, 64, and 84 of Sūra 3 which illustrates or re-enacts the very first time Jews and Christians came to accept the Qur’an as an affirmation of their own Mosaic and Evangelical prophetic origins. Each verse, furthermore, has the quality of a late antique canonical homily or proclamation. The passage itself reads much like the opening canons of an ecumenical synod or council. If we consider Q 3:61, 64, 84 as representing an inter-confessional synod, functioning outside of and in opposition to the Church, three ‘canons’, so to speak, may be identified:

The synod has been convened by the laity (sons, wives and selves) to condemn the clergy (liars) for their Christological disputes. Although the Qur’an by nature does not identify its interlocutors by name, there is no shortage of condemnation of the perceived evil, lying, and scribal tampering of the clergy (e.g. Q 2:79; 77; 107:4), articulated in the spirit of Matthew 23 and Luke 11. In the wake of Chalcedon and throughout the fifth and sixth century CE, the laity and a new class of monastic clergy began dominating the law and politics of the region, giving birth to a powerful brand of “mob politics.”3 In the Qur’an’s Arabian context true faith (Islam) was as much about reviving a pre-Christian, Abrahamic theology (Q 4:125; 10:105; 30:30) as it was about organizing the mob – the demos – to transcend schism in the Church.

Public reenactment of the swearing in of Rep. Keith Ellison (D-MN) on January 4, 2007. Rep. Ellison, the first Muslim elected to the United States Congress, reenacted his oath of office using Thomas Jefferson’s personal copy of Sale’s translation of the Qur’an, a tangible sign of the long and complex intertwining of Islam and American politics. Photo credit: Michaela McNichol (courtesy Wikimedia Commons).

The synod formulates a new (Islamic) faith through forging consensus between Jews and Christians, and unmakes the institution of the Church. Consensus building was the cornerstone of all synods and councils and the resulting canons and creeds. This particular inter-confessional synod, however, sought consensus not through the charisma of a bishop, nor the pragmatism of an emperor, but rather a broader, populist understanding of a faith subsuming Jews and Christians alike.

The synod affirms earlier revelation to Hebrew and Christian prophets. The canonicity of earlier ecumenical gatherings was central to each subsequent church synod or council. However, the canonicity of this particular inter-confessional synod lay not in the authority of the acts and teachings of a charismatic member of the clergy, but rather derived directly from that of ancient prophets and scripture.

The ‘canons’ of Sūra 3 may be contrasted with Canon 1 of the Quinisext Council of 692,4 which states,

Wherefore that piety may be clearly set forth by us, and that the Church of which Christ is the foundation may be continually increased and advanced… Now, therefore, we, by divine grace at the beginning of our decrees, define that the faith set forth by the God-chosen Apostles who themselves had both seen and were ministers of the Word, shall be preserved without any innovation, unchanged and inviolate.5

The genre of writing which gives definition to religious and political institutions – in this case, the church canon – is a genre of which Sūra 3 is an integral part, most especially because it vehemently disputes the authority of the institution of the Church (which it clearly does not trust) to dictate matters of dogma and faith, and because it transcends the Christian apostolic succession going back to Christ through the apostles by going back instead all to way to Abraham, the first “Muslim.” In doing so, however, Sūra 3 is reorienting the entire discourse of church canon. “The Church of which Christ is the foundation” has now been overtaken by a “middle nation” (cf. Q.2:143) and “moderate word” founded upon the primordial faith of the ancient patriarch Abraham. The adherents of this religious nation are none other than Jews and Christians who believe in the Qur’an. This is how Islam began.

EMRAN EL-BADAWI is Assistant Professor and Director of Arab Studies at the University of Houston, as well as Founding Executive Director of the International Qur’anic Studies Association. He is author of The Qurʾān and the Aramaic Gospel Traditions (Routledge, 2013) and co-author of A History of the Classical Middle East (Cognella, forthcoming). El-Badawi’s works has been covered widely by the media, including the by The New York Times, The Christian Science Monitor and Al-Jazeera. He will present on the topic of “Law and Tradition in the Long Seventh Century (570-705) – Between Qur’an and Church Canon” at the 2015 IQSA Annual Meeting in Atlanta.

[1] The scope of the assertion or manner of argumentation does vary, however. Cf. Patricia Crone, “Jewish Christianity and the Qurʾān,” Journal of Near Eastern Studies 74 (2015), 225-253; Guy Stroumsa, “Jewish Christianity and Islamic Origins,” in Behnam Sadeghi et al. (eds.), Islamic Cultures, Islamic Contexts: Essays in Honor of Professor Patricia Crone (Brill, 2015), 72-96; Holger Zellentin, The Qurʾān’s Legal Culture: The Didascalia Apostolorum as a Point of Departure (Mohr Siebeck, 2013), 153; Emran El-Badawi, The Qur’an and the Aramaic Gospel Traditions (Routledge, 2013), 138.

[4] The Quinisext Council or Council of Trullo was the first meeting of the clergy in the wake of the Arab conquests ca. 632-650 and coincides with the reign of first great Umayyad caliph, ʿAbd al-Malik b. Marwān (d. 705) who laid the foundation of the Arab-Islamic Middle East. For more on this, see Emran El-Badawi, “From ‘Clergy’ to ‘Celibacy’: The Development of rahbāniyyah between the Qurʾān, Ḥadīth and Church Canon,” Al-Bayān: Journal of Qurʾān and Ḥadīth Studies 11 (2013), 1-14.